WHAT IS AD VIEWABILITY AND HOW DOES IT IMPACT YOUR REVENUE

Publift has done research on the ad performance on the sites we manage. We’ve seen a direct correlation between the average effective cost per mile (eCPM) and ad viewability.

What does ad viewability mean?

Let’s start by agreeing upon the ad viewability definition. An ad impression is viewable if at least 50% of the ad’s pixels are in the user’s view for more than one second, according to a definition agreed by the IAB and supported by Google and other digital advertising actors. Viewability rate is the percentage of total ad impressions that were deemed viewable.

What impact does ad viewability have on publisher’s revenues?

Advertisers know that ads with high viewability, generate a better return on investment for their campaigns. So advertisers are targeting sites and ads with high viewability. They are also willing to pay a lot more to win these viewable impressions. On the flip side, advertisers are excluding sites and ad placements with less viewable ads because they know they are adding very little to the performance of their advertising campaigns. 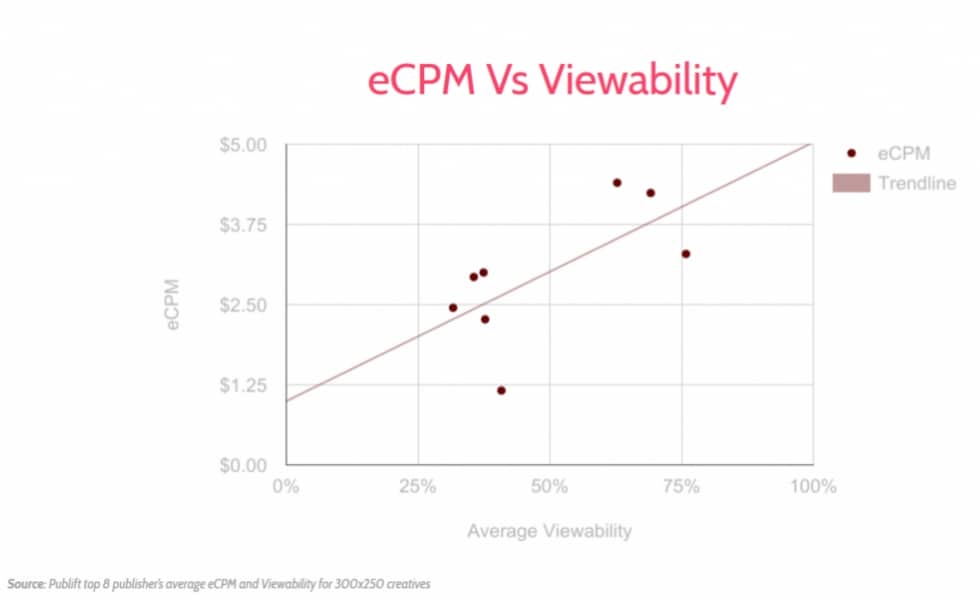 eCPM vs Viewability Source: Publift top 8 publishers average eCPM and Viewability for 300×250 creatives You can see among the top performing sites we manage – those that had an average ad viewability above 50% were attracting significantly higher eCPMs (almost double) than those publishers who had less than 50% ad viewability.  In fact, from the buyer’s perspective – that 50% threshold appears to be a key figure.  We spoke to some key buyers in the market to see what sites they would include when targeting high spending campaigns. Here’s what they said: “We have a minimum threshold well above 50% viewability for all campaigns” Alexis Spurgeon, Programmatic Manager, Commbank “Amnet must adhere to certain viewability thresholds for select clients, ranging from 40-80%, depending on the client, channel and campaign KPI” Vanessa Croew, Client Service Manager, Amnet “Telstra will pay a very high cpm for viewability over 70%. It’s a key metric for their business goals” CJ De Guzman, Business Analyst, OMD So, if your average ad viewability is below 50%, the likelihood is that some of the best-paying campaigns are not targeting your site. If these buyers go through DoubleClick Bid Manager when they look at which sites to include in their campaigns, they can see your account average ad viewability figure. They are not likely to target your site if your average viewable impression rate is below 50%. You may still see some revenue for these buyers from the AdSense/AdX open auction as they target specific users moving across your site, looking at your better performing ad formats. But you won’t be getting as much spend from these buyers as sites with high average viewability.

How can you determine if your low ad viewability score is affecting your revenue?

How can you increase ad viewability

So if you are among the half of publishers that have an average viewability below 50% what can you do about it? Well, there are a few little tricks you can use to increase your ad viewable impressions rate and attract some of those high paying ad campaigns back to your site.

Use the best performing ad sizes and ad positions

The 2 factors that will have the biggest influence on your ad viewability rates are the ad sizes you use and where you put them on the page. So, which sizes should you use to make them more viewable? 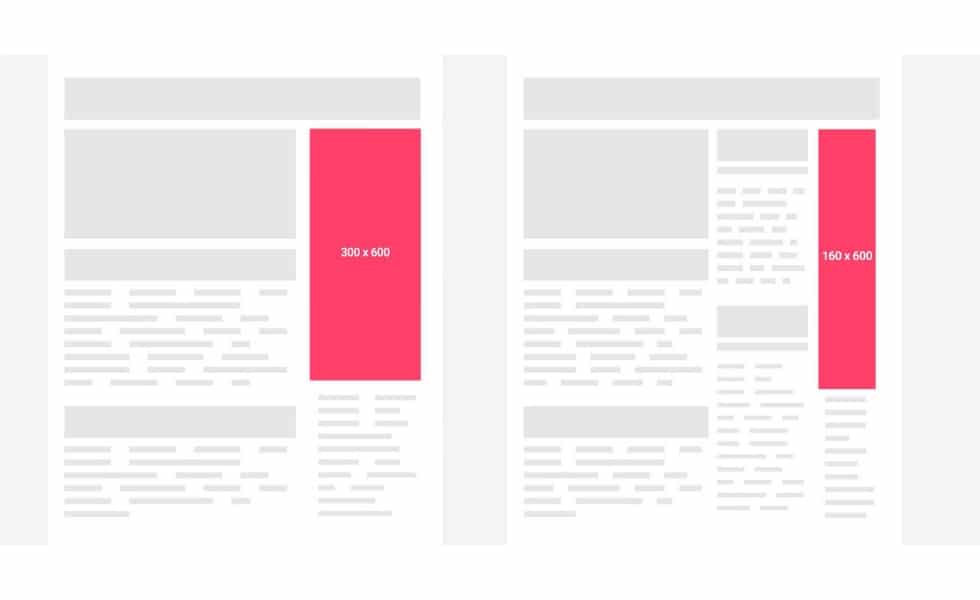 Longer vertical ads + 22% Viewability When we looked at the performance of all ad sizes across our top 10 publishers we found vertical formats (like the 300×600 and 160×600 above) averaged viewability rates of 59%. That was 22% higher than other common sizes like 300x250s and 728x90s. We recommend trying to use at least 1 vertical unit on every page of your site. Preferably in the sidebar of your site layout to avoid interference with your site content. Next is the ad position. Most pages we manage have 3 common ad positions – a leader at the top of the page, an ad in the sidebar and another leader at the bottom of the page. Subtle changes to exactly where you position these ads can dramatically affect how viewable those ads are. For example – positioning the top leader below your site navigation bar instead of at the top of the page. When this ad unit is above the navigation bar –  users often scroll down the page before the ad loads. Which means the viewability is poor. When you place this ad unit below the site navigation bar – the content below is visible while the ad unit is loading. On the top sites we manage we saw publishers that moved the top leader ad unit below the site navigation bar had 19% higher viewability for that ad unit than the publishers that left the ad unit above the navigation bar. In a similar vein, moving the bottom ad unit above the comments, author biography and/or the page navigation bar can dramatically increase ad interaction and make the ad more viewable. We tried this change on a news site we manage. We also increased the size of the ad unit from 728×90 to 970×250. The cpm of this ad unit increased a whopping 27% For the sidebar ad unit, we’d recommend using a 300×600 instead of a 300×250 and making the ad unit sticky. For mobile pages – the top mobile leaderboard (320×50 and/or 320×100) underperforms on all sites we’ve assessed. As mobile connections are usually slower than desktop ones – the problem of the user scrolling down before the top ad unit loads is even more exaggerated. We found that using a 300×250 ad further down the page (ideally with part of the ad poking above the page fold) drove a much higher viewability on mobile and average eCPM increased 68%. 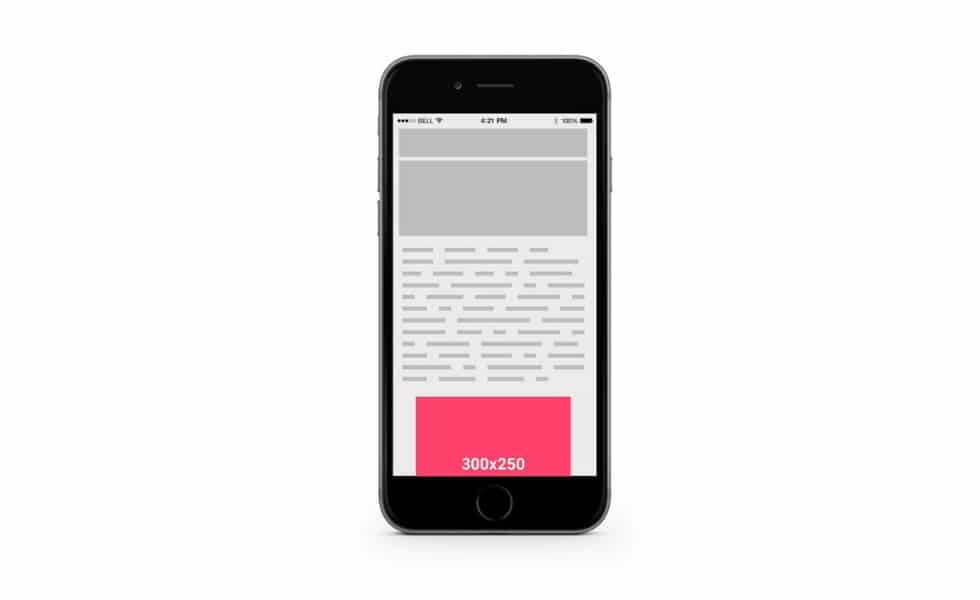 Sticky ads follow users as they scroll down the page. When used correctly they can significantly improve the performance and appearance of ads. Make sure they do not cover or hover over other content though. They should only be sticky where there is no content below them. Most site layouts have the main content body section on the left and a narrower sidebar on the right. If you really want your ads to be interacted with and drive strong eCPMs – you can, of course, put them in amongst the content section on the left. The reality is, that most premium looking sites we work with will not position an ad over there. It’s just too intrusive and annoys too many users. If you feel this way – you have to put some kind of ad unit in the sidebar of the page. These sidebar ads often have poor viewable impressions rate because the user scrolls down through the content on the left without seeing or interacting with the ad unit on the right. A good way to increase interaction and the rate of viewable impression for this ad unit is to make it longer and sticky. Here’s an example of the change we made on one of our publisher’s homepage: 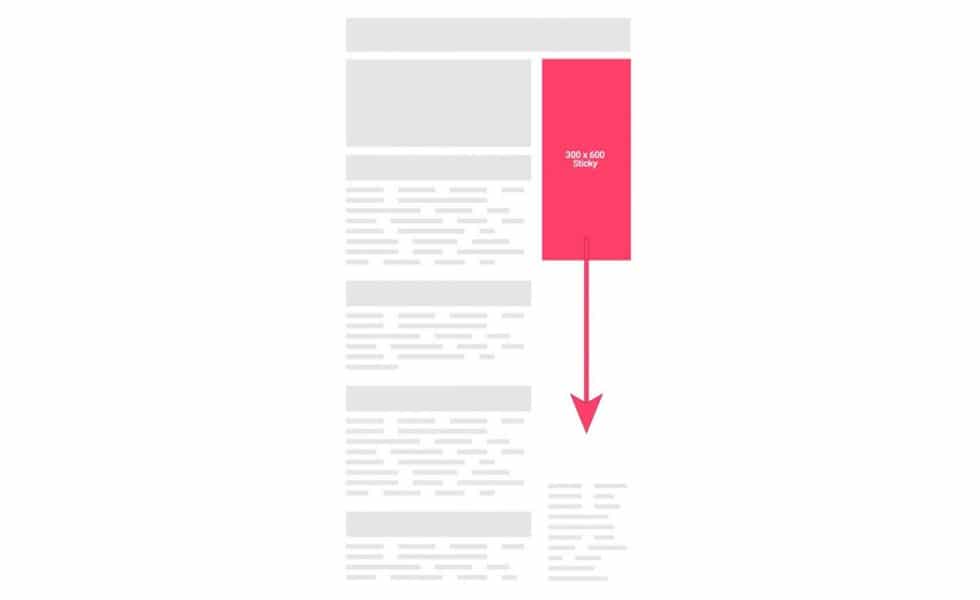 This sidebar ad unit used to be a 300×250 and it sat below social buttons on the right. By switching this ad unit to a 300×600 and making it sticky – we achieved a 3% increase in viewability and a 37% increase in eCPM.

Lazy loading allows you to delay loading parts of the page that are out of view until the user scrolls down. As well as improving site speed, lazy loading often increases viewability. Only ads that are seen are loaded. We recommend lazy loading below the fold ads which have a poor ad viewable impressions rate. These ads often load without the user ever reaching that part of the page and they are the placements advertisers are trying to exclude from their campaigns. They provide no value to the advertiser as the user never sees the ad. By lazy loading these ads you can increase account average viewability score. 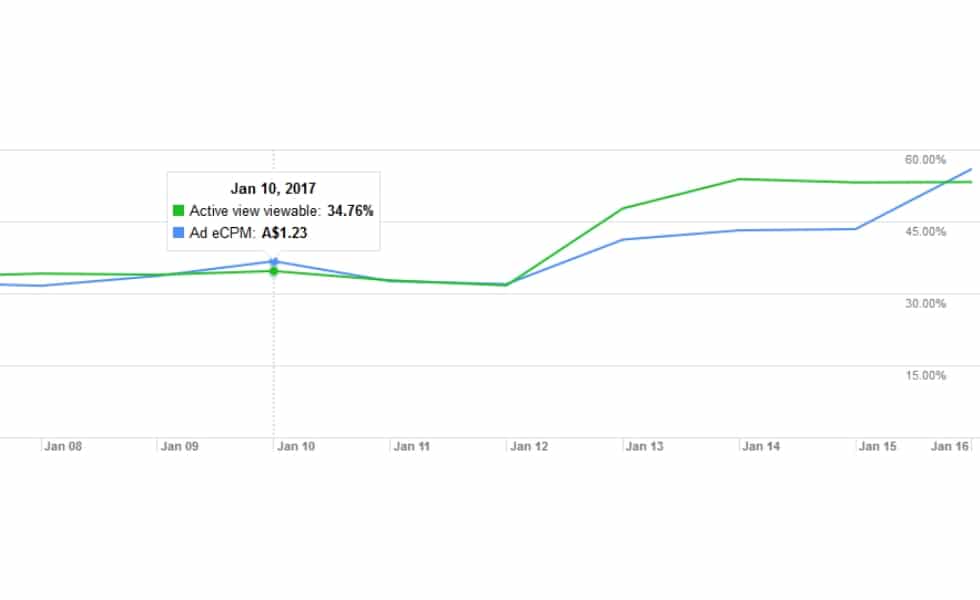 Ad viewability is a key metric of your ad unit’s performance. A low viewable impression rate can have a direct impact on your eCPMs, which will affect your total revenue. In order to maximise your potential revenue, there are some changes you can implement to your ad inventory to increase viewability of your digital advertising units. If your ad revenue has been affected by poor viewability, making these changes won’t reverse that impact overnight. On the sites we made these changes we measured 30 days before against 30 days after. The bigger impact actually came after this period when advertisers started to recognise that site viewability rate had increased. That’s when you’ll start to see the big CPMs from those top advertisers hitting your site. To find out more about what Publift can do for your publishing business, get in touch with us or explore how we helped our clients grow.

Looking for something else?

What is Programmatic Direct?

Programmatic is the use of software, algorithms and user information to streamline the process of purchasing and selling online ads. It is a philosophy that runs contrary to conventional manual placement orders.

Ad fraud is a consistent problem in digital marketing and has shown no indication of settling down, costing the advertising ecosystem over $6.5 billion annually. Let’s find out how ads.txt can help to protect your website against internet and ad fraud.

What Is a Demand Side Platform (DSP) and How It Helps PublishersAd buying and selling wasn’t always as easy as it is today. Over time, the online advertising market has streamlined and optimized the buying and selling of ad space, consolidating supply and demand on ad...

NOT QUITE READY TO TALK? SIGN UP FOR NEWS & UPDATES